On my golden birthday, I wore a blue gingham dress and a bobbed haircut.

Molly, Monica, and the two neighborhood Leslies arrived at my tenth birthday party.

Penny Brownell came too.  I think my mom invited her because everyone else in the neighborhood was coming. Penny talked loud and called her dad “George.”  She was new in the neighborhood and she was popular.  And, she was one of those girls who “took your friends away.”

(Little girls are often threatened by other little girls who “take their friends away” by being cuter, funnier or having better toys.)

My mom hooked up a modest, homemade piñata to the small maple tree in the backyard for later.

I sat on the red velvet-covered piano bench to open my presents.  Inside, I felt shy and self-conscious and I still don’t like opening gifts while a group is watching.

I don’t remember what anyone gave me, except Penny Brownell. She gave me an exquisitely tiny paint set.  The tubed acrylic paints and smooth brushes were housed in a petite plastic case that snapped shut.

Penny told me, “I gave you paints because that’s what you always give everyone for their birthdays.”

I was still thinking about her comment as we all piled into the van. I heard my mom say something like, “We’re going to a chocolate factory,” which sounded exciting.

We were really heading out to see the movie Willy Wonka and the Chocolate Factory. 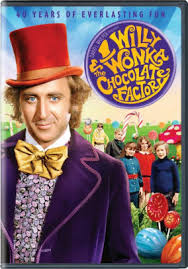 The film was good, but a vague feeling of disappointment followed me back home where the piñata was waiting, along with Mom’s creative rainbow Willy Wonka cake and the paint set.

I blew out ten candles and ate rainbow cake with my guests.

We gallivanted out to the back yard, where a smiling Penny Brownell hit the piñata so hard it cried candy all over the limp August grass.

What I Write About

Thank you for visiting My Word Soup. I’m trying to mix up a delicious….or nutritious….or at least whimsical concoction of words for all to sample.  I hope to season it always with grace.